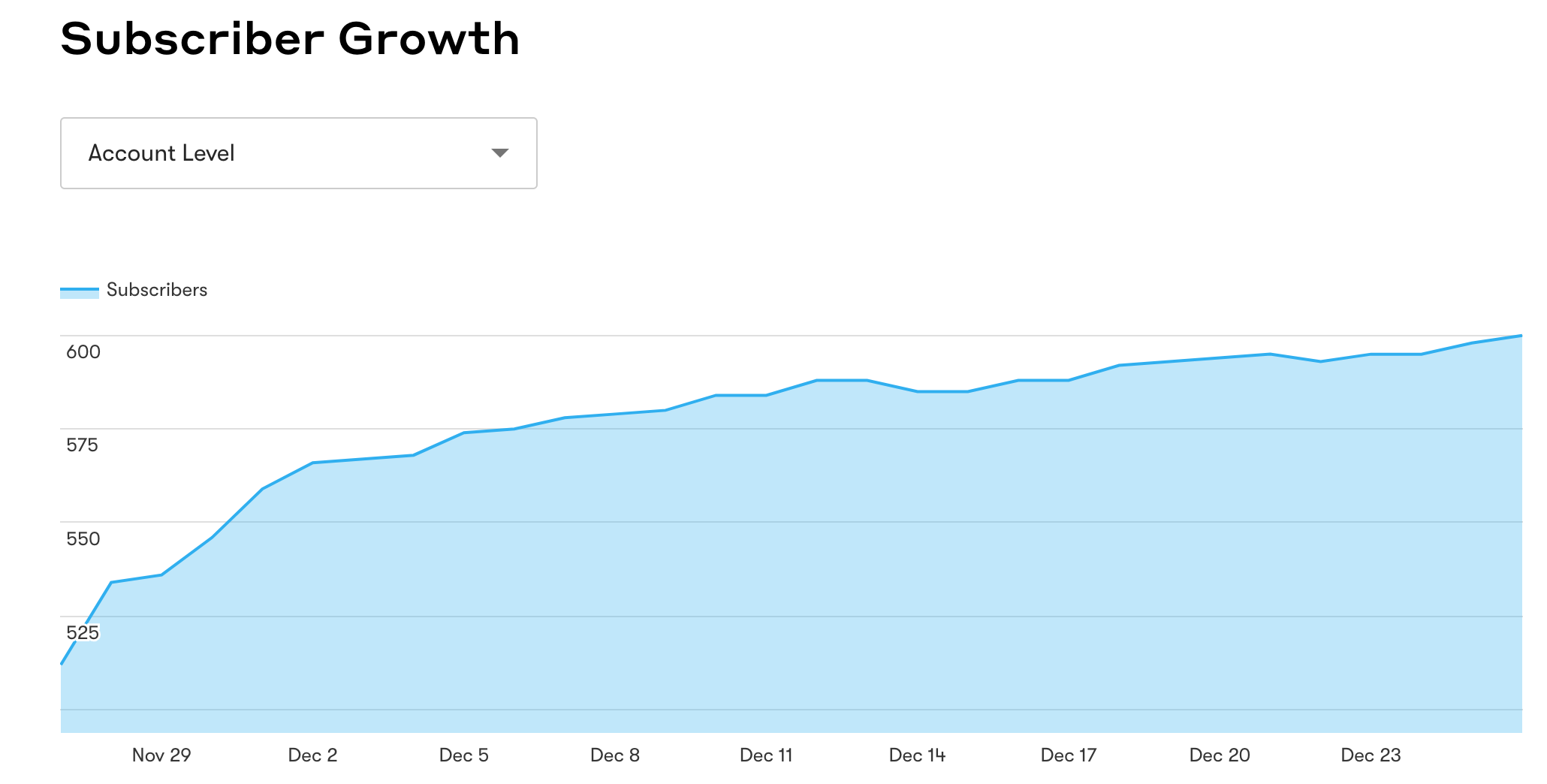 The hardest part about growing an email list from scratch is getting momentum right at the start.

About a year ago, my email list was about 55 subscribers strong.

Which is super tiny. I know.

For a long time, I neglected my email list and instead buried myself in client work because the money was easy, it was coming from all angles, and there was a lot of it.

But today, as I type this… my list of active subscribers has just passed 600.

The “real” number of subscribers should actually be much higher… but every month or so I delete people off my list who aren’t opening my email. And of course… I have had some people unsubscribe, as is natural with any email list.

This all happened because I shifted my a little bit of focus AWAY from taking on more one-on-one work… and started focusing on attracting a tribe of people who I thought I could help in a more leveraged way.

I had money to pay for traffic.

Thing is… I wasn’t exactly sure how I was going to recoup my investment.

So at the beginning of my list-building journey, I DID fuck around a little with paid traffic. But ultimately chose to focus on organic until I had some concrete offers and products and ways to recoup that money.

Paid traffic is the ultimate way to grow your list.

And I believe that if you don’t figure out how to advertise effectively then you’re never going to have a “real business.”

But if you’re in the situation where you’re literally starting from scratch… the method I’m about to show you will give you a huge momentum boost, a huge rush of subscribers and will convince you that it’s worth it to keep going, to keep building your email list.

Here’s what you’re going to do…

This has become the most important rule/philosophy in my business.

I’ve talked with a lot of people who are stuck at the “lead magnet creation” stage.

And most of those people will never move past it.

And they’ll never experience the awesome power of having compiled a list of people who love them. Sad!

I had been stuck in that “I need a lead magnet” purgatory for some time in my career, as well. And knowing what I know about myself, I knew that I needed some incentive and a deadline for getting this lead magnet done if it was ever going to really happen.

I simply decided to ask people if they wanted a thing I was thinking about creating.

And from there it was easy.

Here were the exact steps I followed to get my Lead magnet done and to grow my list 10x in one year.

Step #1: Have many conversations with people in your target market

This is where it all starts.

You gotta talk with your “ideal clients” and find out what their problems are.

Then… brainstorm a few solutions that you could offer in the form of a short and simple lead magnet.

Step #2: Ask people if they want your thing. (Do NOT create it yet)

Here’s what I said the first time I tried this.

Take a look a the “engagement” on the post: 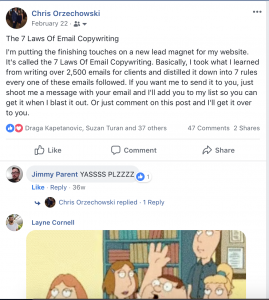 “Hey, I’m in the process of creating this thing. Do you want it? If you want it, leave a comment and let me know… and I’ll add you to my list and send it to you when I’m done.”

This is an easy way to determine whether the people who are closest to you want your stuff.

If NOBODY on your friends list wants it, then you can be pretty confident that complete strangers won’t want it either.

Now when I did this… a decent amount of people said they wanted my thing.

So I created that thing.

Step #3: Reach out to each person individually who left a comment and ask for their email address

That’s all it takes.

You let them know you’re going to add them to your list… and you’ll send your thing when it’s ready.

It should be something you can whip up fairly quickly… so try to get it to them within a day or two.

And yes… you manually do this for each person.

Do not hide the fact that you’re adding them. Be super upfront. If they don’t want to be on your list, then you shouldn’t want them there either.

Step #4: Add people manually to your email list (and get an email software set up and then add all these people if you’re starting from scratch)

Mainly because it’s not only an email software, it’s one single tool you can run your entire online business with. It lets you send emails, host courses and memberships, store your videos, and it even has a built-in shopping cart, funnel builder and much more. It’s fucking awesome. I use it and I love it. And it’s a great tool that can grow with your business – meaning you won’t have to switch software or patch a number of solutions together as your business develops.

You should also have a welcome email set up.

It’s my understanding that the Facebook algorithm rewards posts that get a lot of engagement.

So if FB detects that people are engaging with your post a lot, they’ll show it to a more people on your friend’s list.

When you comment, it adds to the overall comment total. And it increases the number of comments on the post, which adds a lot of social proof for people who are just scrolling.

When people see that a lot of others are asking for something… they naturally get curious, too.

This is a very important step.

Ok now dozens of people have said they wanted your thing.

Now, you’re on the hook and you actually have to create that thing.

So sit your ass down and do it.

People are WAITING for it.

Get that shit done and get it in their hands.

What I’ve found is that when you start publishing content on a consistent, weekly basis… people start sharing your stuff.

Of course, your stuff will suck at first.

But if you keep at this for months and months… you will start to attract more readers.

You publish an article.

You repeat this process.

And everytime, a few more people end up finding you and your stuff… and they join your list.

And you just keep doing this and literally never stop until the day you die.

This Is How I’ve Built My Email List. And With Only A Few Hundred People You SHOULD Be Able To Generate Multiple Four Figures A Month.

Hey dipshit… everyone wants 100,000 subscribers when they’re first starting out.

Because that’s how numbers work… gotta walk before you crawl.

My list is tiny, but I’m still able to generate four figures of income a month from this tiny little list.

If you’d like me to show you HOW to make that happen, then you should seriously consider signing up for my list. I’m launching an email copywriting coaching program called Email Copy Academy. It’s the world’s first guided coaching program designed to help you write email campaigns that sell.

Get on my list with the opt-in box below…